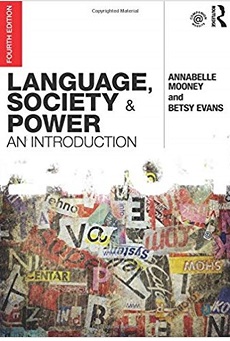 Language, Society, and Power: An Introduction is a fundamental introductory text written by Annabelle Mooney and Betsy Evans. It discusses language functions and their impacts n thought as well as language variation in terms of age, gender, class, and ethnicity.  This book discusses the representations of people through their language and whether these representations matter or not. It also discusses the way identity is formed and performed, and it considers the resourceful potential of language in politics, media, and everyday speech.  The authors state that this book is intended for students of English language and linguistics, media, communication, cultural studies, sociology, and psychology. This review gives a summary of the topics discussed in the book and a review of some of its essential sections.

Chapters 1 and 2 give a comprehensive and inclusive introduction to the book. The authors describe language as a system with variation that is able to make new meaning. The authors successfully provide a synthesis of theories related to the study of language such as Jakobson’s schema of functions, Saussurian conceptualizations of language, as well as the Sapir-Whorf Hypothesis. They facilitate the introduction of these theories through the use of figures and examples. Thus, they establish a baseline that fosters comprehension of the themes further elaborated in the remainder of the textbook.

Chapter 3 is centered on language in political contexts. The authors discuss the linguistic features employed to persuade audiences. They argue that we should take notice of the language of politics if we are to reveal and clarify how persuasive arguments that can influence us to support a particular stance that clashes with our beliefs. The authors also examine the politics of education and show how the language of commercial transactions is increasingly used in higher education. Chapter 4 discusses language and the media; the ability to read and understand the texts found in the mass media. The authors investigate how the language of mass media can sustain ideologies. They argue that mass media literacy practices are described as a form of power; knowing how to read a text has symbolic capital.

Chapter 5 discusses Linguistic Landscapes which refers to language use in the everyday semiotic landscape. The authors propose that official and unofficial signage can express various messages in linguistic landscapes. They persuasively consider the power employed by unofficial signs with examples from specific speech communities in Belgium and France. They also use The National Courtesy Campaign that encouraged Singaporeans to be more courteous as evidence that signs can have a greater communicative strategy. In their discussion of gender in Chapter 6, the authors examine the representation of gender inequality at the lexical level and explore the performance of gender as reflected in language use. They discuss differences in men’s and women’s talk in terms of verbosity, turn taking and hedges. They offer possible explanations for these differences, and ways in which sexism is encoded in the English language system.

Chapter 7 demonstrates how ethnicity can be communicated through the use of specific linguistic features. The author appraised the cultural capital associated with the use of a particular linguistic variety while reminding readers that some ethnolects are subject to linguistic subordination. They include a notable section on how some ethnic groups are reclaiming historically disparaging terms such as ‘wog,’ a derogatory Australian term used in reference to some immigrant populations. Chapter 8 explains patterns of language change and variation associated with aging. It demonstrates how the terms used to describe a person of a specific age group can contribute to social stratification, which influences how much power a person has in the social hierarchy.

In chapter 9, the authors examine the correlation between language and social class by first discussing attitudes about class. They then efficiently approach research on social networks and communities of practice to display that language use, and symbolic capital might be more local than has been suggested by traditional definitions of social class considering that specific linguistic features can be accepted in one group and rejected in another. Chapter 10 discusses Global Englishes where the authors note that most linguists do not believe any variety of English should be the “Global English.” However, they remind readers that extreme opinions exist about which variety of English should be used globally. They investigate different models that capture the variety that exists in English and highlight how language learners are often compared to native speakers through a deficit approach that stigmatizes learners and sets unrealistic goals. Reasons for learning and using English vary and, as such, the authors reference perspectives that call for validation of all varieties of English. They call attention to the language variety that exists within “inner circle” nations (e.g., the United Kingdom, the United States). They then examine the diverse communicative uses of English in Singapore, India, and Hawaii. Next, they consider the pressures of the linguistic marketplace and the hegemony of English.

The final chapter proposes research projects for emerging scholars with an interest in sociolinguistics such as an analysis of the language used in television programming directed at children or an investigation of how one’s own language style is context-dependent. The authors concluded their book with a reminder to readers of the importance of reflecting on how we use language.

The book is a great read for anyone interested in sociolinguistics and not only the ones majored in the field. It can be efficiently used as a textbook and for self-study purposes. The authors adopt a thorough contextual pedagogical approach in presenting the topics. They support their presentation with multidimensional contexts, examples, and a class-like presentation of some chapters, visuals, and sections. To emphasize the discussed sociolinguistic theories comprehensively, they prompt readers to do critical thinking activities and read further research in the fields. Therefore, the book is appropriate for linguists who are interested in sociolinguistics variables such as ethnicity, gender, class, age, identity, in addition to the Standard English debate, politics, and the media.

In terms of presentation, the book is well organized and easy to follow. The authors write in a very clear and organized way, and all relevant details are mentioned with smart simplicity. Important key terms in sociolinguistics are bolded within the text and explained in the footnotes to make sure that reader grasps the terms presented in the book.  Each chapter’s subsections are outlined on the first page of the chapter with page numbers. This detail prepares readers for the material to be covered and contributes to the presentation of a unified text. At the end of every chapter, the authors provide a brief yet helpful list of updated and expanded research projects and further reading sections for each chapter. Chapters 1-10 contain “www” symbols to indicate that readers can find web-based resources on the companion website. However, the authors do not specify how to access the companion website in the text, but it is available at no additional cost via the publisher’s website. The book accomplishes its goals as an introductory text for the study of language in social contexts. I suggest that the text is read in order as many chapters are contextualized within the greater scope of the book as a unified text—a positive feature. Should readers read chapters in isolation, I recommend providing supplementary reading materials.

In terms of illustration, concepts are explained through illustrative figures, tables, charts, pictures, and cartoons. In this way, the authors add vividness to their presentation and make material appealing to the reader. It has a variety of novel and engaging international examples drawn from everyday life – including material from social media and newspapers, television cartoons, and YouTube. For example, the chapter on Linguistic Landscapes, includes signs, graffiti and the internet and the chapter on Global Englishes, explores variation in … and attitudes to English around the world through illustrative models.

Each chapter ends with activities that encourage critical thinking and reflection. These tasks could be ideal for in-class discussions or homework assignments. The author prompts readers to think of controversial areas discussed in the book that do not require one answer, but an extended discussion and further reading. Such activities encourage readers to present their views, reflect on their experience, use references listed at the end of each chapter and resort to more on the topics discussed. To encourage avid readers to find valuable information in rich references, each chapter also ends with recent developments in theory and research about topics that are not typically found in other sociolinguistics books such as the relationship between language and politics, and language and the media. Therefore, researchers, as well as students, may appreciate the breadth of topics covered in the book.

As a textbook, it is an interesting and thought-provoking book, one which, by virtue of its interactive activities, its concise glossary and the stimulating variety of the questions covered, is likely to bring to life for readers the language we live by. However, some readers are likely to find the book an imperfect account of the relationship between power and language. It is introductory and lots of further readings required, especially if you are already well versed in the field and looking for a more advanced understanding. One criticism is that gender is defined in narrow, dualist terms; given cross-cultural and cross-linguistic variation, which appears somewhat misplaced in a book concerned with society and power. Moreover, little attention is given to some of the staples of sociolinguistics such as bilingualism and code-switching, politeness, and language planning and maintenance, while significantly more is made both of language and politics and of language and media. However, in an imperfect world, it makes a bold attempt to enfold a massive area of territory in one relatively short book. Finally, although all examples come from English, the subjects discussed should also be relevant to readers and scholars of other languages. Also, even though the content of the book is excellent, my main quibble is the surprising number of typographical errors in some chapters.

Overall, I have no hesitation in recommending Language, Society and Power: An Introduction as a practical, engaging and accessible introduction to sociolinguistics and the political dimensions of language use. In light of today’s educational challenges in regard to understanding and incorporating diverse language and linguistic debates, this book offers an excellent opportunity to incorporate several themes related to language— power, politics, media, gender, ethnicity, age, social class, identity, and standardization of English, moving from theory to practice. The book contributes to our understanding of language as a critical element of learning human language and its critical functions in the diverse linguistic communities in this world

Stay updated with our news and announcements