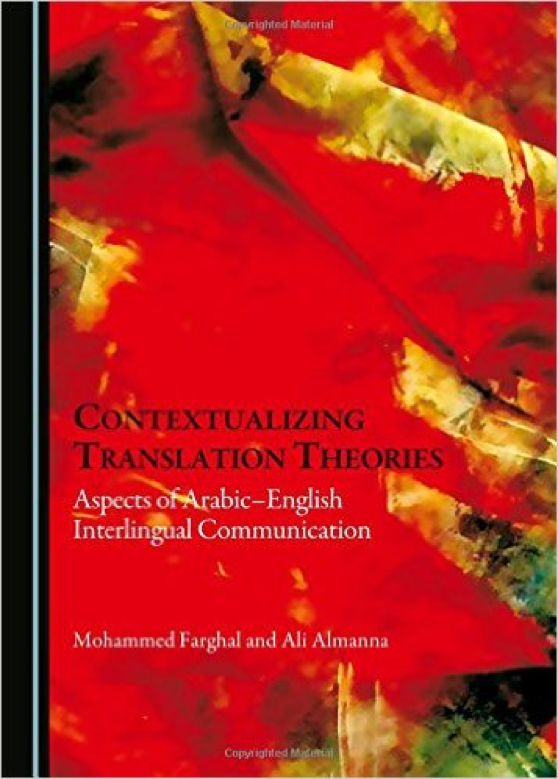 The coauthored book of Mohammad Fergal and Ali Almanna sheds lights on problems, difficulties or hurdles every translator faces. The book is divided into ten chapters: The first chapter traces a historical survey of the development of the discipline, from early attempts till the nineteenth century; it also surveys contemporary translation theories. The second chapter deals with the parameters and constraints in translation, tackling cultural problems, norms, ideology, etc.; the third chapter presents linguistic considerations such as Phonological, morphological, syntactic, semantic, word level, phraseology. The fourth chapter deals with textual aspects of translation. The fifth analyses Emic versus Etic perspectives. The sixth is an in depth analysis of Pragmatic dimensions. The seventh chapter presents the semiotic dimension drawing the difference between structural and interpretive semiotics. The eighth deals with stylistic considerations, and the ninth presents the communicative dimension dealing with dialect, register and discourse (field, tenor and mode). The last chapter offers some general concluding remarks.

This particular book hits a large category of scholars in different fields as well as students, teachers, and researchers of languages and cultures, translation, linguistics, discourse analysis, intercultural communication, and media studies as Said Faiq stated at the preface of the book. What characterizes it the most is the simple but extremely analytical style and the variety of information it offers.

The title chosen by the editors adequately encapsulates the message of the text that is to put into practice the theories taught and known in Translation, especially in bilingual Arabic-English complex context. The preface, written by Said Faiq, provides revealing information about the book itself. Besides, his personal opinion regarding the book makes the readers keen on digging more and more into its core. The introductory sentence, “the market does not need yet another book on translation theory and its didactics, but it desperately needs this book,” tells a lot about the effectiveness of its content.

Faiq also mentions an important feature about this book which is the critical readings of available strategies provided by the authors of this book that allow the reader to see the advantages and disadvantages of each strategy.

The work fulfills its purpose in many aspects. First, it traces and explains, as mentioned before, the evolution of translation and the different approaches adopted throughout history; but what is more important is the large number of practical examples embracing the essence of the Arab culture and at the same time the western culture trying with a unique attempt to set things at their right place with a clear analysis and deep knowledge of both cultures. The books on the market nowadays are either too theoretical or too practical. What differs and characterizes this particular book is this exhaustive theoretical description followed by exhaustive practical analytical examples.

Many quotes stand out but what caught my attention most is the one reproduced by Venuti’s and that summarizes the authors vision regarding domestication and foreignization, Farghal and Almanna (2015, 15):

“Translation never communicates in an untroubled fashion because the translator negotiates the linguistic and cultural differences of the foreign text by reducing them and supplying another set of differences, basically domestic, drawn from the receiving language and culture to enable the foreign to be received here.”

This book fulfills its purpose, which is contextualizing Translation theories in an English Arabic context, especially when the authors set concrete examples regarding taboos or blasphemous segments. The deep knowledge of the authors of the Arabic culture supports the arguments of this given book. The authors have resorted to different and diversified techniques to make their ideas reach both Arabic and English culture at the same time. An extremely typical example perfectly selected in this context is the problematic that arises when the translator has to translate the map of the Arab World and mentions instead of the word Israel, Gaza Strip of West Bank. Besides, the choice of Arab versus Persian Gulf emphasizes the tendency of the translator working for an Arab and non-Arab agency, merging political tendencies with culture. The new ideas elaborated in the book are truly groundbreaking because they raise lots of problematic issues in terms of translation, for instance, the loyalty of the translator is questioned when some critical political concepts are adopted, fidelity and non-fidelity in translation are also mentioned besides free or/and liberal translation, and so on. The book is kind of a unique attempt to breach all traditional trends regarding translation studies initiating with a new trend putting all known theories into practice.

In the end, this book will earn a great popularity due to its straight access to the ones in the translation major and also to those who would like to get a detailed critical idea about the field. Even those unfamiliar with the translation domain will find the book highly accessible because of its direct and concrete message. The different examples strengthening all mentioned ideas are the guarantee of its success.

Stay updated with our news and announcements